Robert Halfon’s reforms to apprenticeships have the potential to transform the manner in which the nation’s workforce is trained.

This is why a general welcome has been reflected back to Ministers by training providers.

Where concerns have been identified, they have been communicated effectively and with evidence based on previous experience.  It seems to me the Association of Employment Learning Provider’s approach has been “That’ll work – but this will work better” in their dealings with Ministers and officials.  However, responsibility for apprenticeships moved relatively recently from BIS to DfE.  It may be the latter Department’s officials are so used to the intransigence displayed by the “Blob” within education more widely, they have trouble responding to constructive feedback from people who are actually trying to “help get water out of the canoe”.

Real progress has been made – yesterday saw the publication of the Register Of Approved Apprenticeship Training Providers – following a huge procurement exercise conducted by the Skills Funding Agency.  There are now over 1700 training providers for Levy-paying employers to choose from.

The Institute For Apprenticeships – a new body created by the Government as part of these reforms – has been set up and published a Draft Operational Plan for consultation.

Work continues on Apprenticeship Standards – with new ones being published as they are approved.

A disciussion point remains the expectation those 16 – 18 year olds who start an apprenticeship having obtained a “D” grade for Maths or English at GCSE should be put through a resit rather than gain their Level 2 via the “Functional Skills” route.

The latter option focuses the Math and English at those elements required to be an effective worker.  There is a strong argument for saying if after eleven years of education a Grade “C” has not been obtained, there is a good reason and six months with a new provider is setting these youngsters up to fail.  That group produces far higher success rates with Functional Skills.

Perhaps Ministers will change their position, or experience will provide the evidence either way.  It is unlikely to be resolved in the short term. 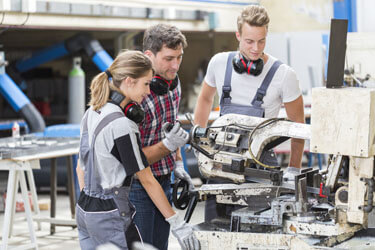 Apprenticeships Will Provide Highly Skilled Staff At All Levels

The best employers – particularly those likely to pay the Levy – will by now be planning how to transform their staff development programmes, to harness the money that will be available in their Digital Accounts.

They are right to get on with it – the funds taken in April will be lost in 2019 and completing the training required for an Apprenticeship Standard takes at least twelve months.

They will be looking at the entry-level (Level 2) apprenticeships for their receptionists, call-takers, mechanics, shop staff, warehouse operatives.  Level 3 apprenticeships for people who are taking their first steps into supervision and management – the Office Managers, HR Policy Advisers, Team Leaders.  Accountants will perhaps be taking somebody through a Level 4 Higher Apprenticeship in Tax to broaden the range of services they offer.

The College of Policing supports apprenticeships – we could see Inspectors undergoing Level 5 Higher Apprenticeships in Leadership and Management.

Want to be a Lawyer, but would prefer a Debt Free Degree?  How about taking a Level 6 Chartered Legal Executive Apprenticeship and following up at Level 7 to become a Solicitor?  See here.

And when you look at that list of examples, remember just how powerful these opportunities will be as a tool for social mobility.

This is a policy that builds upon past success, using a strong brand, well known for supporting training.  Robert Halfon and his team have done outstanding work – and covered the hard yards – to make it happen.

Apprenticeships are entirely consistent with the Government’s stated aim of creating a country that works for everyone.  These reforms deserve commendation for the way they will enable the nation’s historic and embedded skills shortage become a thing of the past.