Life has many disappointments, but high on the list must surely be when somebody looks down on you.  And there is no surer way to do that than to demean somebody’s occupation. 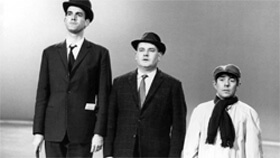 This country has spent many years seemingly moving away from the old-fashioned “class system”, where the unpredictability of birth set your pathway in life.  But occasionally there are attempts by some people to suggest they are “better” in some way than their fellow citizens.

I remember in my first job – a Bank Clerk – seeing one of the customers had his occupation listed as “Gentleman”.  Puzzled, I asked what this meant, to be told in reverential terms that “he doesn’t have to work for a living”.  Shades of Bertie Wooster!  Of course these days, a set of numbers in the National Lottery can put you in that position. So can being able to throw, kick, or run with a ball.

But as a wise old owl once told me when I was about to get a bollocking for some misdemeanour at work, “Just imagine he’s got his trousers down” – that’s certainly something to create equality.

Yet we have a number of structures to segregate us into groups – my postcode will help tell my insurers how much my premium should be.  It will add or subtract points from my credit rating.  Having a mortgage rather than paying rent will do the same.  Occupations count as well.  Try getting car insurance if you’re a musician or an actor if you want to find out.

My education level and occupation will inform advertisers, as well as politicians.  There are two groups that you hear about quite often – the “ABC1’s” and the “C2’s”.  Advertising – particularly online – has got more sophisticated over the years.  But when newspapers call me to sell advertising space, they will give the breakdown of their readership in terms of ABC1 and C2.  (Mind you – it won’t make a blind bit of difference, print advertising just doesn’t pay its way for a business like ours.  That’s why print media companies are having such a tough time.)

Political parties know they won’t win an election unless they have the support of the C2’s – better known as “White Van Man”  and his Missus – (usually referred to by politicians as “Schoolgate Mums” with a complete lack of awareness as to how stereotypical this might be).

Whilst we go through life knowing these truths, to be looked down upon is still something that rankles.

SuperSkills is a place where trade skills matter.  We have the unenviable job of assessing whether somebody has that level of skill, experience and knowledge to be regarded as a “Skilled Worker”.  That’s the difference between having a job or not in the trade these days.  And people are rightly proud of their skills.  They have taken years to learn and earn.  That’s why we value and respect them.

That’s why I was so annoyed to learn that as part of the preparations for Brexit, the Government’s Migration Advisory Committee has decided that all construction trades are to be regarded as “Low Skilled”.

That means a number of things – not least for the number of people coming into the trades.  It’s been difficult enough trying to persuade schools to promote construction as a career for young people to consider without putting this additional obstacle in the way.  Trade rates of pay are now higher than they have been in ten years.  Yearly earnings north of £50k are common.  If you want to work in London, even higher.  A “Head of Department” in a school will earn on average about £43k.  But still the careers staff won’t promote construction as a valuable and rewarding career.

“Imagine the kids sitting in school hearing about ‘low-skilled’ jobs.

Then ask yourself why any pupil would choose to pursue a trade, when the prime minister herself thinks it’s of secondary importance.”

Additionally, the construction sector employers have all signed up to the Construction Skills Certification Scheme – to ensure the workforce has the right skills and qualifications for the particular jobs they are doing.  The CSCS scheme is in danger of being undermined by this proposal.

And I wonder if this decision has actually been informed by regard of perceived social status of construction workers by those who make up the Migration Advisory Committee – or is it just they are woefully ill-informed by the highly technical nature of the trades involved and the level of knowledge and skill required to undertake these jobs?

Are they really suggesting that gas cookers all over the country have been fitted by “Low-Skilled” workers?  Or your electrical wiring?  This is nonsense.  But it’s in danger of becoming “Government Approved” nonsense.

There’s another issue.  Placing construction trades in the category of “Low Skilled” work means they cannot recruit trades from overseas using the “Tier Two” Visa.  When this applies to workers from the EU after Brexit, firms will not be able to recruit staff in the way they have in the past.

The construction sector needs at least 40,000 new entrants a year – just to keep pace with last year’s Ministerial promises about house-building.  Both political parties have added to these numbers since then.

About 9000 people graduated construction Apprenticeship programmes last year – and the number of youngsters starting has fallen since then.

Is The Person Wiring Your House REALLY A Low-Skilled Worker?

That’s a shortfall – each year – of 31,000.  It doesn’t take a mathematical genius to work out we actually need Pavlov the Plasterer as well as Bob the Builder if we are to build the houses the country so desperately needs.

That’s why we need to start valuing people – regardless of their occupation – for the contribution they make to society – but in particular, to get away from this poorly thought out proposal that lumps all the construction workers together with this blanket “Low Skilled” label.