It’s about this time (Nine o’clock on the First) in January that most people discover they have already broken their “New Year Resolution”.  The tell-tale cigarette butt, the rather nice (sugared) coffee, that muffin, left over from Christmas, that tasted wonderful.  “These simple things…………………” remind you that your pledge to treat your body as a temple “come the New Year” has once again failed.

Yet it is all part of our annual festivities surrounding Christmas and the New Year, at which time Christians celebrate the birth of Christ in Nazareth, Jews mark the re-dedication of a temple with Hannukah and Druids acknowledge the shortest day of the year by celebrating the Winter Solstice.

The New Year does present a time for reflection and whilst breaking an addiction (smoking, sugar or over eating) is perhaps too ambitious, it could also be in the smaller, personal and day-to-day interaction we could make a few changes that will help us and those around us feel a lot better.

The smile you receive when you let a fellow motorist out.  See?  You both feel good.  (And the muttered expletive when they come out, but don’t acknowledge your courtesy, can give you a similar release of serotonin…..) 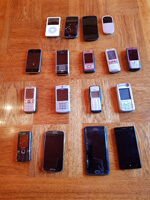 Getting your office/van/desk/bedroom (delete as necessary) tidy.  Great feeling, no cost.  (Says the man who has just cleared the “Man Drawer” during the Christmas break.  Anyone want some Omani Rials?)

But the best by far has got to be “Learning something”.  There is no better means of taking control of your own life.  One of the greatest facilities for information gathering is at our disposal twenty four hours a day.  And what do we use it for?  Looking at pictures of cats.  Photographing meals.  Shouting (METAPHORICALLY!).

By now you’re probably thinking a person who owns a training business is promoting “Learning” as a good thing.  What a surprise.  But I am not REALLY NOT saying anything about what SuperSkills offers.  People who read this blog are usually people who know what we offer already and they tend to get to it last, which is why we don’t use it to sell stuff.

By “Learning something” I mean just setting yourself a goal that means you will not avoid doing things because you lack the “know how”.  Or not offering an opinion because you’re just an “Ordinary person”.  (And by the way, be prepared to see a posting on just that concept of “Ordinary People” here soon.)  If you don’t know – find out.

A friend who is an electrician gets asked to change fuses in  plugs by people.  I’m not kidding.  They would happily pay him, rather than look on You Tube.  There are 360,000 UK results on You Tube for that subject and people call him.  Bonkers.

And it is really important to know stuff at the moment, especially as we head towards a fundamental change in our trading relationship and security alliances over the next few years.  We can’t afford to outsource these things to the “clever people”.

Do you know that if we do not have a trade deal with the European Union we still have to comply with their standards for goods and packaging to sell things in the EU – even if we are doing so within the terms of the World Trade Organisation?  And does that matter to you as an individual?  I’m pretty sure that as I don’t manufacture stuff – let alone sell it to the EU 27 nations, the question of having two different production lines won’t matter to me.  But if the UK has a different standard in years to come, my pal who makes truck parts is quite worried about the prospect.  And that matters not only to him, but all the people who work for him. 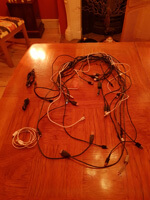 Where Did All These USB Cables Come From?

And it probably matters to the salesman in Wickes who told me they “Aren’t allowed to say their products are made in England because it’s racist”.  Which of course it’s not.  But it is true to say that EU Member States have agreed to forego national identification of products, because they are all made to the same “CE” standards.  But it does explain why my new Utility Room is being kitted out in products from B&Q.

So as we go into 2019, perhaps you can join me in just trying to learn something new every day – something that will help you in life.  Perhaps it might be the answer to the question I asked myself the other day…………….Just how did I accumulate so many USB cables?