Our last post confirmed and welcomed the agreement reached in the Brexit negotiations about the rights of EU nationals who had moved from other nations to work in the UK.

The Prime Minister has written an open letter to all people outlining what has been agreed and we reproduce it below for the benefit of those who have not seen it elsewhere: 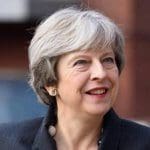 As Prime Minister of the United Kingdom, I am proud that more than three million EU citizens have chosen to make your homes and livelihoods here in our country.

I greatly value the depth of the contributions you make – enriching every part of our economy, our society, our culture and our national life. I know our country would be poorer if you left and I want you to stay.So from the very beginning of the UK’s negotiations to leave the European Union I have consistently said that protecting your rights – together with the rights of UK nationals living in EU countries – has been my first priority.

You made your decision to live here without any expectation that the UK would leave the EU. So I have said that I want you to be able carry on living your lives as before.

But I know that on an issue of such significance for you and your families, there has been an underlying anxiety which could only be addressed when the fine details of some very complex and technical issues had been worked through and the foundations for a formal agreement secured. 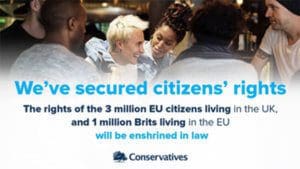 When we leave the European Union, you will have your rights written into UK law.  So I am delighted that in concluding the first phase of the negotiations that is exactly what we have achieved.

The details are set out in the Joint Report on progress published on Friday by the UK government and the European Commission.When we leave the European Union, you will have your rights written into UK law.

Your rights will then be enforced by UK courts. Where appropriate, our courts will pay due regard to relevant ECJ case law, and we have also agreed that for a period of eight years – where existing case law is not clear – our courts will be able to choose to ask the ECJ for an interpretation prior to reaching their own decision.

So as we take back control of our laws, you can be confident not only that your rights will be protected in our courts, but that there will be a consistent interpretation of these rights in the UK and in the European Union.

We have agreed with the European Commission that we will introduce a new settled status scheme under UK law for EU citizens and their family members, covered by the Withdrawal Agreement.

If you already have five years of continuous residence in the UK at the point we leave the EU – on 29 March 2019 – you will be eligible for settled status. And if you have been here for less than five years you will be able to stay until you have reached the five year threshold.

As a result of the agreement we have reached in the negotiations, with settled status, your close family members will be free to join you here in the UK after we have left the EU. This includes existing spouses, unmarried partners, children, dependent parents and grandparents, as well as children born or adopted outside of the UK after 29th March 2019.

The agreement we have reached includes reciprocal rules to protect existing decisions to recognise professional qualifications – for example for doctors and architects.

And it also enables you to be absent from the UK for up to five years without losing your settled status – more than double the period allowed under current EU law.There will be a transparent, smooth and streamlined process to enable you to apply for settled status from the second half of next year. It will cost no more than applying for a passport.  And if you already have a valid permanent resident document you will be able to have your status converted to settled status free of charge.

We are also working closely with Switzerland and EEA Member States to ensure their citizens in the UK also benefit from these arrangements.I have spent many hours discussing these issues with all of the other 27 EU leaders over the last eighteen months as well as with President Juncker, President Tusk and the EU’s Chief Negotiator Michel Barnier.

I am confident that when the European Council meets later this week it will agree to proceed on this basis.  And I will do everything I can to ensure that we do.

So right now, you do not have to do anything at all.

You can look forward, safe in the knowledge that there is now a detailed agreement on the table in which the UK and the EU have set out how we intend to preserve your rights – as well as the rights of UK nationals living in EU countries.

For we have ensured that these negotiations put people first.

I wish you and all your families a great Christmas and a very happy New Year.